As soon as Legendary announced their plans for a King Kong movie, I was in. It was supposed to be set entirely on the mysterious Skull Island and feature the big gorilla’s origin story. Great. Then, it turned out the movie would be a part of the newly built cinematic universe centered around various big monsters, Godzilla included. Even better. Next, they announced the cast, featuring the likes of Tom Hiddleston, Brie Larson, John Goodman, Samuel L. Jackson and John C. Reilly among others. Wow, just wow! And finally, they showed the first trailers, with visual references to Apocalypse Now. And I was sold completely, hyped out for a crazy rollercoaster ride of a monster movie. 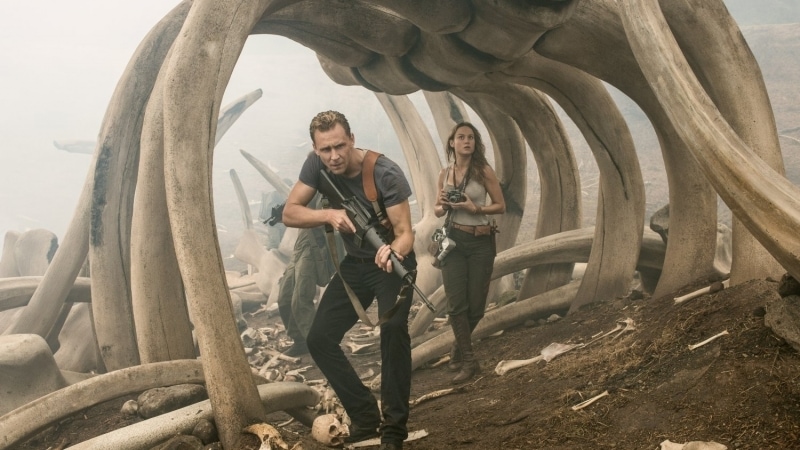 If you touch a classic movie such as King Kong, you should be aware of certain basic rules. Because there’s no King Kong movie without a big monkey (duh!), a blond beauty who has a special relationship with that monkey, and the opposition of men versus nature. The screenwriters of the movie Dan Gilroy, Max Borenstein and Derek Connolly know of all these King Kong 101 and respect them. At the same time, however, they allow themselves to go completely crazy in terms of how the story plays out. All this is done with one clever trick: take basic King Kong elements and mix them with Godzilla tropes: make the main monster a defender of people, who fights with another big monster. Brilliant, isn’t it?

But let’s get to the very start. The year is 1973. Former British SAS Captain James Conrad is hired by the U.S. government agent Bill Randa to guide an expedition to a mysterious, uncharted “Skull Island”. Other recruits include the Sky Devils – a helicopter squadron led by Lieutenant Colonel Preston Packard, whose mission is to escort the group to the island. They are also joined by a pacifist photojournalist Mason Weaver, who believes the operation has got dark purposes.

Kong: Skull Island introduces its characters quite quickly and almost immediately transports them to the titular island. Then, it’s non-stop action and fun. Filled with clever allusions to Apocalypse Now and taking its cues from both the original King Kong and Japanese kaijū movies, the movie is a very intelligent play with the genre and it doesn’t stop to amaze.

Sometimes pastiche-y, sometimes serious, but mostly fun, the movie introduces the mysterious island’s lore and pits Kong not only against some of the humans, but also against other monsters. And just like watching Godzilla taking on Mothra or King Gidhorra, it’s super fun to watch Kong fighting a terrifying „Skullcrawler”.

OK, the story serves mostly as a pretext to show the crazy action (and expect such scenes as the one with Tom Hiddletson in a gas-mask, surrounded by weird green fumes, and cutting through pterodactyls with a katana), but it doesn’t mean you don’t get interesting character moments too. Simple archetypes at first glance, they eventually reveal something deeper and you certainly get attached to most of them. I mean — not as much as to Kong, but still.

And though I said the story is mostly action-driven, it is also quite well written and coherent. Simple, but you don’t need it to be different. Especially, when you look at the details: the allusions and parallels to other movies and the way the classic King Kong tropes were dealt with. 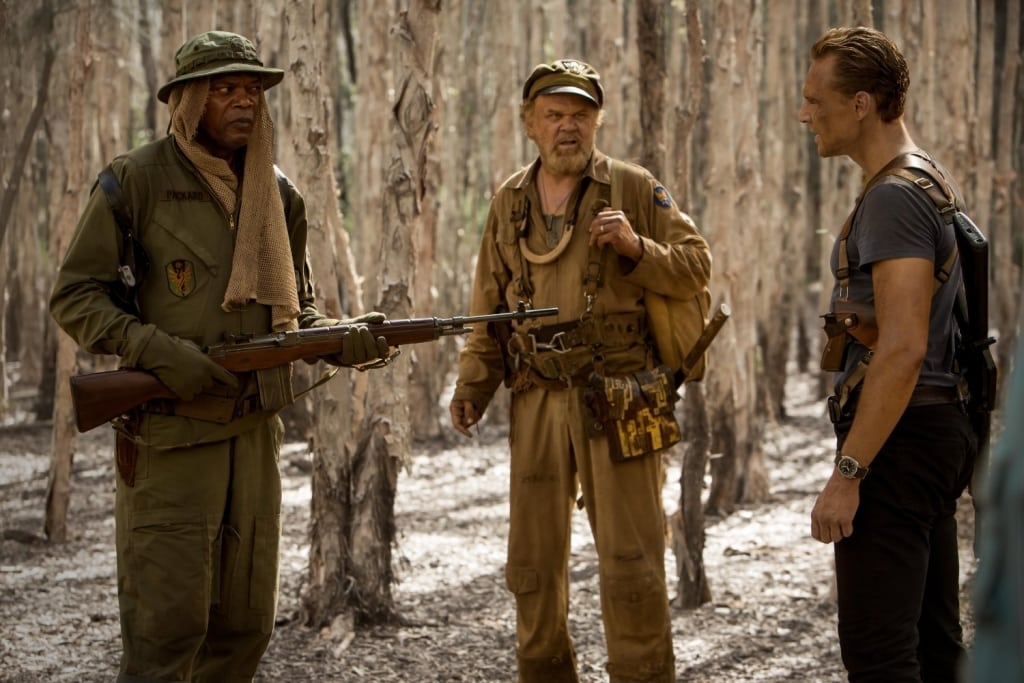 The film was directed by Jordan Vogt-Roberts — not a debutant per se (his first movie, The Kings of Summer, came out in 2013) , but a person who is still to build his name in Hollywood. Adding Kong: Skull Island to his resume was certainly a good choice.

The first thing you see is how cleverly Vogt-Roberts uses the Apocalypse Now aesthetics, which — when confronted with the overall fun factor Kong: Skull Island brings — gives the movie an original look. And believe me, it’s really difficult to take your eyes off of the omnipresent shades of orange. It was a very good stylistic choice.

The director also presents an incredible ability to balance seriousness with humour and craziness. He swiftly moves from the more somber scenes to the ones that bring levity and the ones which are supposed to invoke nerdgasm. The diversity of the movie’s tone and very competent editing allow the audience to delve deeper into the adventure and almost “live” through it like it was their own. 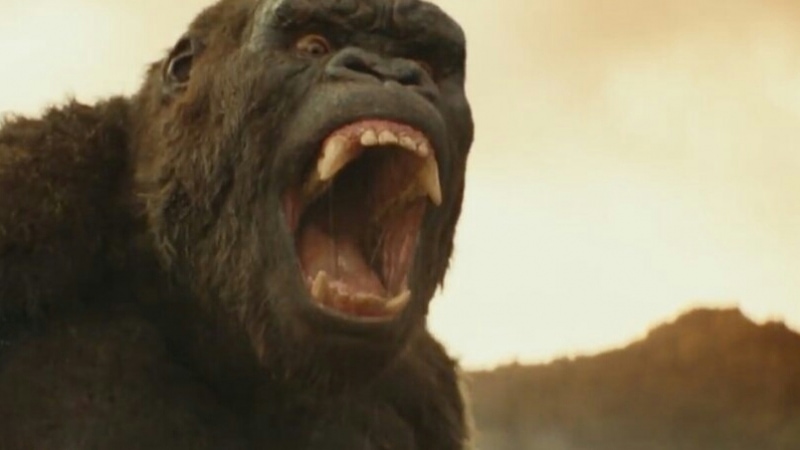 I am also happy that the special effects were used very wisely. The movie is not packed with computer imagery. Instead, Vogt-Roberts uses a combination of both practical effects and CGI. Fantastic locations (the movie was shot around Vietnam and on Hawaii) are paired with a beautiful performance-capture monkey, who not only is gigantic (that’s the biggest Kong we’ve ever had), but also feels as real as he has never been. The explosions and monsters are as pleasant to watch as the detailed make-up (look at the Skull Island indigenous people).

And all that comes with a very decent soundtrack, composed by Henry Jackman. It might not have the originality of Desplat’s score to Godzilla, nor is it particularly rememberable, but when it comes to underlining the movie’s tone and emotions, it does its job perfectly.

The co-stars outshining the stars 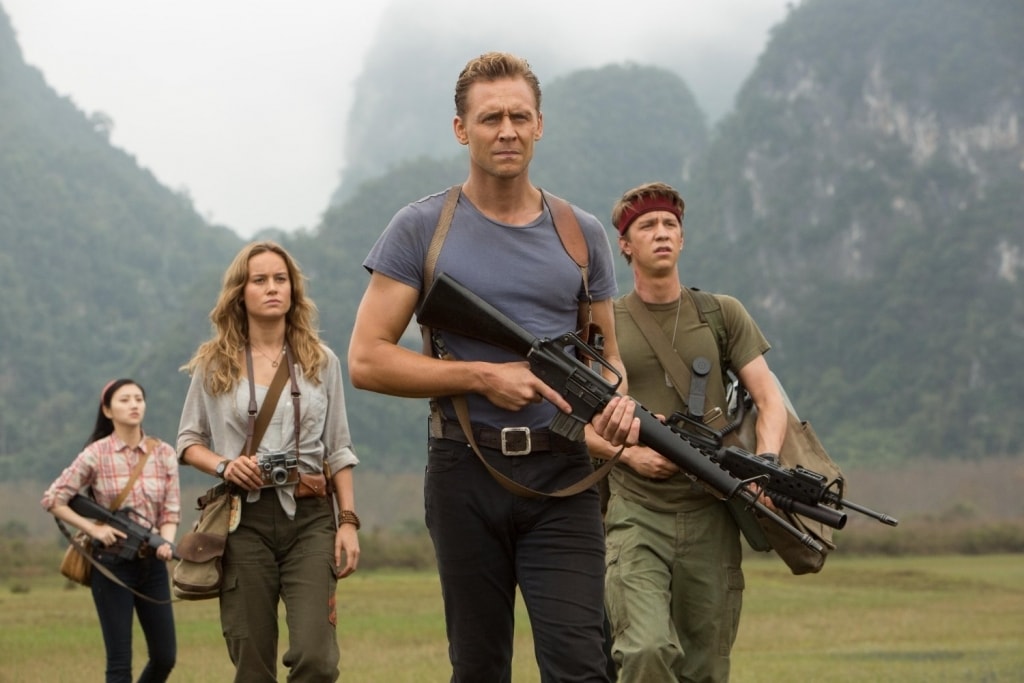 The protagonist, James Conrad, is played by Tom Hiddleston and he does his job decently: he’s believable as a sensitive and sensible soldier, but not particularly impressive. And so is Brie Larson as a brave and idealistic journalist, Mason Weaver.

The really amazing acting begins with the co-stars. Although Samuel L. Jackson is… well, Samuel L. Jackson who got a gun and went crazy, he does his job really well and makes a fantastic “shoot first, ask questions later” type of a soldier. John Goodman doesn’t disappoint and as always delivers a solid performance — this time as a scientist who may seem crazy, but is dead serious in what he does. It’s great to see him when he gets contrasted with the naivety and enthusiasm of Corey Hawkins‘ Houston Brooks. But the real star here is John C. Reilly as Hank Marlow. The role was originally written for Michael Keaton and I believe he would also do an awesome job, but I’m really happy it was Reilly who eventually got the part.  He has got just enough of that auto-sarcasm needed to make someone like Marlow — a completely crazy concept of a guy — believable and enjoyable.

Is it worth it?

So, is Kong worth seeing? Definitely. Everyone should find something for themselves in the movie: the cinephiles will have an opportunity to see how the interpretation of one of the cinema’s oldest monsters has developed and changed through years; geeks will have fun with all the references and allusions, and the entertainment junkies will be… well, entertained. Come on, Tom Hiddletson in a gas-mask, surrounded by weird green fumes, and cutting through pterodactyls with a katana? Who wouldn’t want to see it?