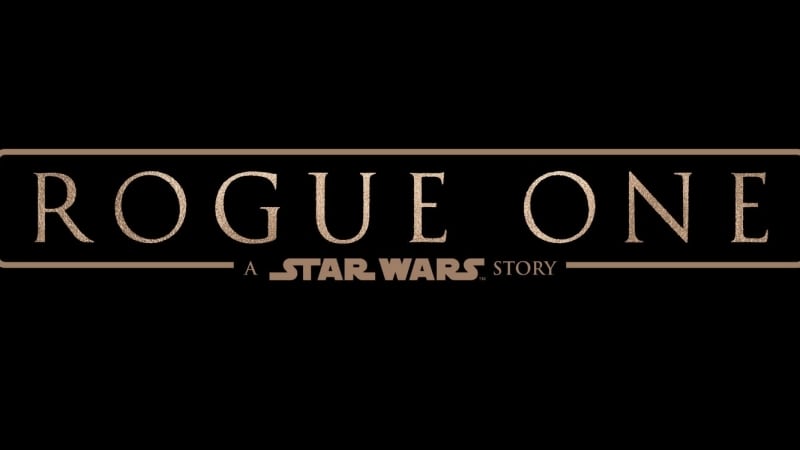 Rogue One: A Star Wars Story is a movie many fans waited for. It’s basically the first stand-alone cinematic live-action entry in the Star Wars series. And although the Force plays a role in the story, the movie focuses on the less mystical part of the Star Wars lore: the Rebellion and their fight to retrieve the Death Star plans.

A New Depth to a Known Story

We all know what happens. Rebels steal the plans of the Death Star, which leads into the events presented in New Hope. As the opening crawl for Episode IV says:

It is a period of civil war. Rebel spaceships, striking from a hidden base, have won their first victory against the evil Galactic Empire.

During the battle, Rebel spies managed to steal secret plans to the Empire’s ultimate weapon, the DEATH STAR, an armored space station with enough power to destroy an entire planet.

Pursued by the Empire’s sinister agents, Princess Leia races home aboard her starship, custodian of the stolen plans that can save her people and restore freedom to the galaxy…

Rogue One is exactly this story, although with much more depth and detail. We learn who stole the plans, why they did it and what price they had to pay. 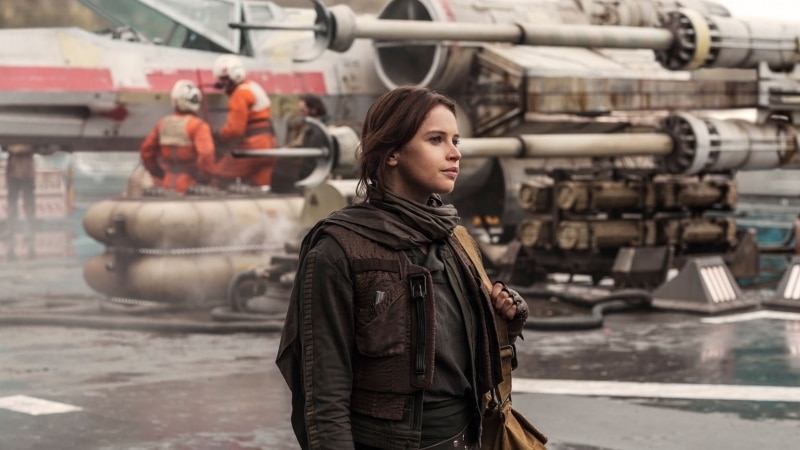 It all begins with the Erso family: the scientist Galen, his wife, Lyra and their daughter, Jyn. As soon as they are introduced, they must face a threat – approaching Imperial forces led by ambitious Orson Krennic. Krennic wants to recruit Galen so that he finishes the Death Star – a secret weapon, whom you all Star Wars fans and fellow geeks are surely familiar with. I won’t spoil the dramatic moments which occur after the encounter and just say that Galen is separated from his family and the story then jumps a few years forward.

We now follow the adult Jyn Erso and, at the same time, the forces of Rebellion. Their paths are bound to cross, which will change not only their lives, but also the fate of the whole Galaxy…

Although the story seems to have a rather longish exposition and tends to jump around different places in order to introduce a variety of characters, it actually plays out really smooth. We have a chance to get to know each and every person and see what motivates them. This way we are emotionally involved in their further fight for the galaxy’s freedom.

The writing is really sharp and clever, with a lot of nods to the classic Star Wars trilogy (but not The Force Awakens kind of nods – think rather about subtle allusions than a similar plot structure). At last we see the Rebellion in all of its shades: not idealised, but shown as a body of different factions, some of which might take extreme – immoral at times – measures. The fight the Rebellion engaged in was not a pretty one and Rogue One’s authors (John Knoll pitched the story, Gary Whitta wrote the first draft and Chris Weitz refined it together with fellow filmmaker Tony Gilroy) are very clear about it. 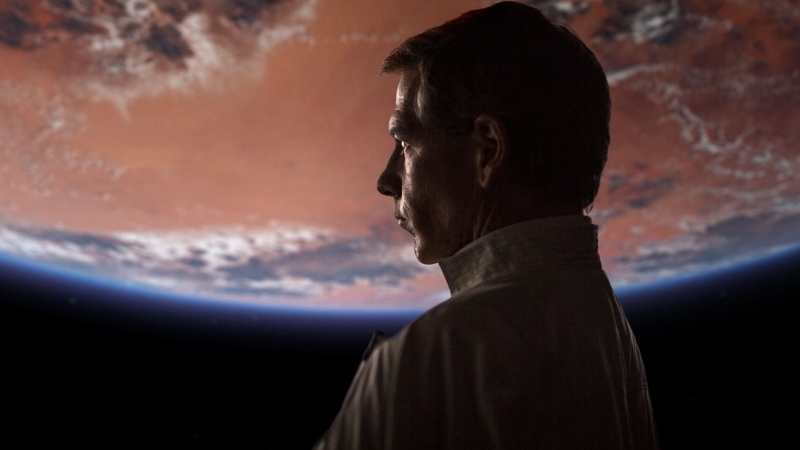 And there’s also a very interesting villain: very ambitious and uncompromising – the features which make him quite a fierce antagonist for our heroes. His story, however, could be a little bit more developed, as you leave cinema with the need to know more about this intriguing man, Orson Krennic.

The overall tone of the movie seems to be more dark and serious than your regular Star Wars flick, which gets even more underlined in the third act. But worry not, there are also some typical star-warsy humour bits, particularly from the excellently written K-2SO – a new droid you’re bound to love.

It’s difficult to talk about Rogue One‘s aesthetics and style, because they’re both familiar and… fresh. This paradoxical outcome would probably be best felt while listening to Michael Giacchino’s score, particularly to the movie’s main theme. It begins with two familiar notes, enough to get you to think you’ll hear the famous Star Wars Main Title. And then Giacchino strikes with something completely different. This is basically the case of the whole movie.

Director Gareth Edwards gets what makes Star Wars tick. Breath-taking sequences of spaceships/space stations hovering in, well, space? Check. Exciting battles? Check. Likeable heroes in a varied, intriguing universe? Check. Universal battle of good vs evil? Check. And yet, Edwards manages to add many of his own elements (or deduct the other ones) to make Rogue One stand out.

Probably the most striking one would be the lack of the opening crawl (which makes sense, as the whole movie is already based on one). Instead we have a pre-title sequence, which is supposed to serve as a prologue to the story and indeed works very well as such.

Another thing you notice is the lack of signature Star Wars wipes. The use of this type of editing transitions was inspired by Kurosawa Akira’s movies and constituted a part of Star Wars unique style. Edwards, however, decided not to follow into the footsteps of Lucas in this case and again: it was probably a good decision as rougher, more traditional transitions suit the story in a better way.

Another thing is how Rogue One was filmed. At times you get the typical star-warsy operatic sequences (which, at the same time, look very modern and fresh – another one of these paradoxes). Mostly, however, you will be taken into the very centre of action, like in no other Star Wars movie: you will feel like you are one of the Rebels, taking stance against the evil Empire.

The production design is impeccable. Fantastic sets and locations (the fallen monument of a Jedi!), and spectacular costumes (the one belonging to Orson Krennic!) are paired with the enormous effort to be faithful to the elements we’ve known from the original trilogy. The effect is, again, both fresh and familiar.

The special effects are generally very good – but that’s a Star Wars standard. It should be noted, however, that all the explosions and battles look real not only because of the work done by the practical effects experts and the CGI ones, but also because of a certain sense of gravity that was given to the scenes featuring the SFX (both on the screenplay and direction levels). Of course, there are also some controversies, particularly when it comes to bringing some of the faces back from the dead or making people younger. While debatable morally, the effect is quite impressive, but still not perfect, hovering somewhere around the uncanny valley.

And before I’ll go through the performances, I’ll come back to music for a moment. I already said Michael Giacchino (whom I adore since Lost) masterfully played with John Williams’ work and cleverly incorporated bits and pieces of his music to the new compositions, making something completely new. It was a tremendous effort, as Giacchino had only about four weeks to write the music, which perhaps is not one of his best soundtracks (this title goes to Lost, Up and Tomorrowland, in my humble opinion), but still is very memorable and emotional.

The Rogue One creators collected a very talented and diverse cast. With a natural aura of rebellion, Felicity Jones was a perfect choice for the protagonist, Jyn Erso. She has no problem of channeling her weariness and braveness, and gives a compelling performance. Diego Luna is adorable as Cassian Andor (a Rebellion pilot), though he is also capable of some seriousness. Alan Tudyk (yes, the one and only, finally in a Star Wars movie!) as the voice of K-2sO brings some levity to the serious story, as do Donnie Yen and Jian Wen as a ying and yang (seriously, they’re two sides of the same coin) duo of Force believers. But perhaps the most impressive performance in the movie is by Ben Mendelsohn, who brings even more depth to the main antagonist. The characteristics of Krennic come to Mendelsohn with ease, thanks to which his portrayal is authentic in a terrifying way. 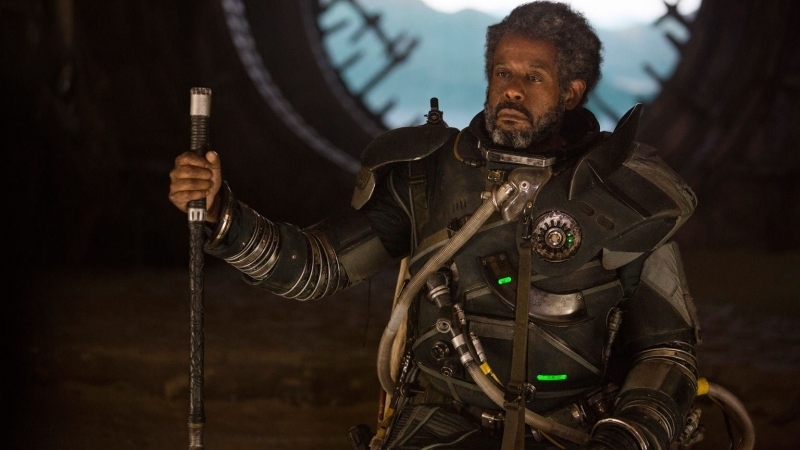 It’s a pity that two other known actors, Mads Mikkelsen and Forest Whitaker‘s performances were not as good. Mikkelsen, who plays Jyn Erso’s father, doesn’t have much to do and the inner conflict of his character is not brought to a full potential. Whitaker, on the other hand, who brings to life Saw Gerrera (whom Star Wars fans may remember from The Clone Wars animated series) is slightly overacting, which unfortunately takes some drama from his character.

So, is Rogue One worth seeing? Definitely. If you’re a Star Wars fan, then it’s a movie just for you. Emotional, mature and surprising at times, this is one of the best entries in the series, despite being a spin-off. 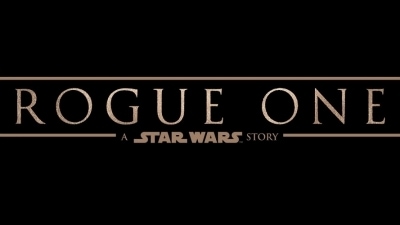 Disney orders re-shoots for “Rogue One. A Star Wars Story”