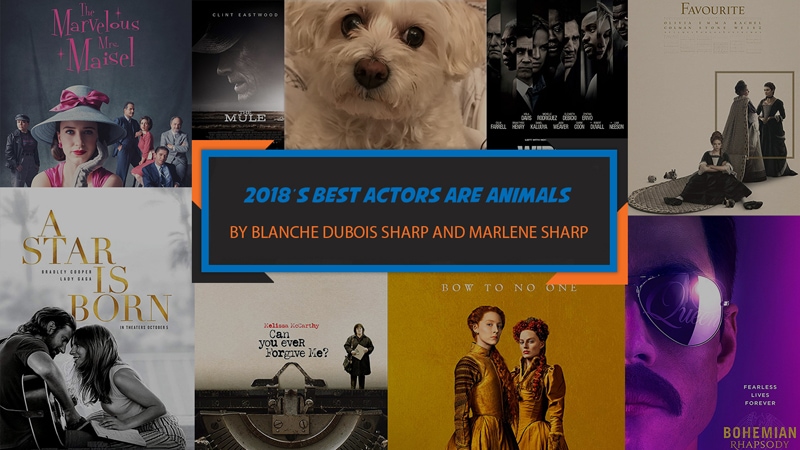 Hello. This is me, Blanche DuBois Sharp, a.k.a. me, Blanche. As it were, I am a movie star due to my 2017 highbrow, awards-bait, film festival circuit film “Blanche’s Bichon Buzz.”  See also “Moonbound24.” It is on my IMDb profile page, and it is quite a good web series, even though I share billing with a chicken.

As Blanche DuBois Sharp, a.k.a. me, Blanche, a movie star, I am qualified to judge who stank/stunked, and who entertained my mother (Marlene Sharp) on the big screen last year-ish. This is Oscar season, after all, and everybody has an opinion.  And that goes double for dogs.

As it were, I am a dog, so my 2018 selects will reflect my unique tastes (and smells). In my opinion, the best 2018 actors are of the animal persuasion. Also, they are not necessarily stars of titles that you’d expect. Sure, there are the usual suspects in blatantly pet-centric movies.  You know what I mean: think of the obvious scenery chewing in “Dog Days,” “Isle of Dogs,” and “Peter Rabbit.” It’s borderline embarrassing, really.

So today, let’s give a four-paw salute to those unsung heroes of people-predominant movies: the beasts! The varmints! The fuzzy femme fatales! Here is Blanche’s Best in Shows 2018!

Charlie the big, brown, fluffy dog in “A Star is Born.” Thank goodness a star is not shorn! He’s a good actor and all that, but he’d be nothing without his dreamy, Bradley Cooper-y, canine locks.

17 bunnies in “The Favorite.”  Rabbit actors are a rare breed, so attention must be paid. These furry divas share a single cage on screen, plus they share said screen with human prima donnas. Kudos to those cottontails!

House cats in “Bohemian Rhapsody.” There are bunches of them in multiple scenes, and they cause nary an allergy attack for the fictionalized version of Freddie Mercury.

German Shepherd (police dog) in “The Mule.” He is a brute but manages to be lovable in his pursuit of scrawny drug kingpins like Clint Eastwood’s character Leo Sharp who has the same last name as mother and me, but is no relation until the DNA tests tell us otherwise.

Irish wolfhounds in “The Favorite.” Silent, but deadly, and that’s not counting their collective aroma.

The horses in “Mary Queen of Scots.” They carry the film, and some of their passengers look cumbersome.

The mule in “The Mule.” Just kidding! Clint Eastwood is a man, silly!

Simone the dog in Season 2 of “The Marvelous Mrs. Maisel.” This isn’t a movie, but it should be! Take a hint, Hollywood! Also, Simone is a star. She will not be ignored.

2. Can You Ever Forgive Me?

Jersey the Cat in “Can You Ever Forgive Me?” Spoiler alert: Her death scene is the high point of the movie. Truly breathtaking!

Olivia the dog in “Widows.” Without Olivia, there is no “Widows.” Sure, she does not cause the death and destruction on screen, but she sure brings it all home to roost! Brava, Olivia! There surely is a part for you in “Blanche’s Bichon Buzz II: The After Bath.”

Thank you for reading! Do you have a favorite animal performance of 2018? If so, then please, kindly keep it to yourself. As it were, this is my territory. Consider it marked.