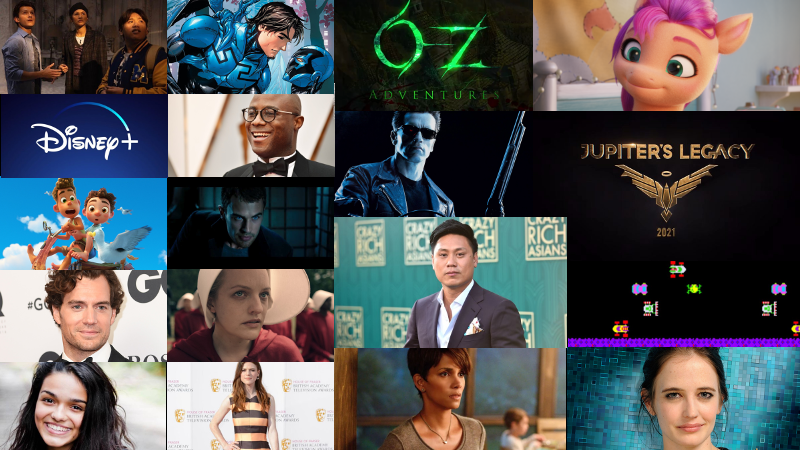 Angel Manuel Soto, the director behind “Charm City Knights”, will helm “Blue Beetle” for Warner Bros. The film will be based on the comic book character of Jamie Reyes, the third Blue Beetle introduced on the pages of the comic books published by DC Comics. The Wrap reports that the film will be written by a Mexican screenwriter Gareth Dunnet-Alcocer. This will be DC’s first superhero film starring a Latino character, which is a huge step for diversity. I can’t wait for more news on the project.

Speaking about PlayStation, Sony held their State of Play virtual event last week, revealing a few new titles and dates for previously announced ones. You can watch it below…

…or read a quick recap:

DNEG Feature Animation and director William Joyce are preparing an animated adaptation of F. Scott Fitzgerald’s “The Great Gatsby”. The novel, which entered the public domain this January, will be adapted to screenplay by Brian Selznick. Certainly, an animated version of this particular story might look amazing, so it’s worth to keep an eye out for this one.

In a lengthy interview with Deadline, directors Tomm Moore and Ross Stewart revealed that they are working on an animated series for Apple TV. The creators of the “Irish Folklore Trilogy” („The Secret of Kells”, “Song of the Sea”, “Wolfwalkers”) said that it’s going to be “epic because it’s feature-quality, hand-drawn animation across 12 half-hours, and then a big, hour-long special at the end”. I love Moore and Stewart’s style and I’m very excited about the project.

Netflix released its first teasers for “Jupiter’s Legacy” — the live-action adaptation of Mark Millar’s comic. The series is set for release on May 7 2021.

Konami’s “Frogger” will become a game show for Peacock because of reasons.

They all proved to be fake, of course — a joke on Holland’s tendency to tell a tiny bit too much. The joke continued a day after the actors’ Instagram post. Sony released a video of the actors in the studio and, this time revealed the real title of the film.

So, “Spider-Man: No Way Home”. With all the news and rumours of it being an ambitious, multiverse crossover, I hope this one will finally do justice to the “Spider-Man” mythos. And if not, there’s always “Into the Spider-verse”.

ViacomCBS have announced their plans for Paramount+, yet another subscription-based VOD platform. Here they are in a super-short summary.

Henry Cavill shared a photo on his Instagram, teasing a secret project. There is a piece of paper with some blurred text on the photo. See it below.

Of course, it just begged for online sleuths at Gamepressure to use super-focus filters or some other photoshop magic to basically make the text relatively readable. And it revealed something really interesting: words like “Cerberus”, “Reaper”, “Geth” or “Tali’Zorah”. Ringing a bell? Yep, sounds like “Mass Effect”. Is a live-action adaptation of the games coming, with Cavill taking part in it? I guess we’ll just have to wait and see.

Disney has made quite a few announcements during the latest TCA press tour. Here’s a quick summary.

Halle Berry will star in Matt Charman’s new film, “The Mothership”, which is in development for Netflix, the Collider reports. She will play a fearless woman whose husband unexpectedly goes missing. She will then find a mysterious extraterrestrial object beneath her home. The discovery will push her to unearth the truth behind her husband’s disappearance and find him. And there may be the CIA involved in the matter. The premise sounds really promising and with an actress as good as Berry the film may turn out great entertainment.

♫Jeepers Creepers, where’d you get those peepers?♫
Remember the Creeper? He will come back in a film titled “Jeepers Creepers: Reborn” this fall. This will be the first entry of the series not directed or written by the controversial Victor Salva. Instead, Sean Michael Argo penned the sequel and “Iron Sky’s” Timo Vuorensola helmed it. According to Variety, the story will be set during the Horror Hound festival in Louisiana and will see horror fanboy Chase and his girlfriend Laine face-off against the Creeper.

“My Little Pony” is going to Netflix. A new, CG-animated film will be released this autumn on Netflix, and an animated series will follow. Here’s the film’s official synopsis:

„In the new movie, the pony world of Equestria has lost its magic. Friendship and Harmony have been replaced by paranoia and mistrust, and Ponies now live separated by species. Sunny — a feisty and idealistic young Earth Pony — is convinced there’s still hope for this divided world, but her slightly misguided and often hilarious efforts to change hearts and minds have led to her being branded a misfit. When Sunny befriends a lost Unicorn named Izzy, who wanders innocently into the Earth Pony town of Maretime Bay, the town has had enough. Izzy and Sunny must embark on an epic adventure that will include a daring jewel heist, outrageous conspiracy theories, elaborate musical numbers, and the world’s cutest flying Pomeranian. Their adventures will take them to faraway lands and force them to challenge the status quo by facing their fears and making new friends out of old enemies. The world Sunny has dreamed of her entire life could finally become a reality as Sunny and her newfound friends fight to prove that even little ponies can make a big difference.

Jon M. Chu’s schedule has just got even busier. Besides directing “Wicked”, he will no also helm “The Great Chinese Art Heist” for Warner Bros. The film will be based on the GQ article by Alex W. Palmer, which follows a series of museum art robberies in Europe. The Chinese antiquities, which were stolen during these robberies, ended back in China, begging one question: is the Chinese government behind this? The film could be a thoughtful examination of who gets the right to cultural heritage and I’m happy Chu was chosen to helm this picture.

Eva Green, Mark Strong and Chai Fonacier will star in “Vivarium”, Lorcan Finnegan’s psychological thriller about a fashion designer suffering from a mysterious disease, which confuses her doctors and frustrates her husband. And then a Filipino carer comes and reveals a horrifying truth. Count me in!

Disney released the first trailer for Pixar’s “Luca” and it looks like it will be a lesson of tolerance and acceptance — something I love when pop culture explores.

HBO’s new adaptation of Audrey Niffenegger’s “The Time Traveler’s Wife” has found its stars: Rose Leslie and Theo James. This will be the second time the book comes to the screen after Warner Bros. film adaptation. Hopefully, this one is better.

Rachel Zegler who will debut in Steven Spielberg’s “West Side Story” has been cast in “Shazam!: Fury of the Gods”. The actress will play a key role, although the details are currently kept secret.

Hulu has announced the release date of “The Handmaid’s Tale’s” season 4. June will continue to struggle with Gilead on April 28th. Here’s the trailer.

American McGee will reimagine “The Wonderful Wizard of Oz” for TV and Games. See the details in the tweet below.

Happy to announce "OZ: Adventures" our twist on the original Oz books, is now with Radar Pictures.

They are developing the concept for TV and Games. We revealed this news and talked about the potential for this project over on our latest Twitch Stream:
https://t.co/hfqL6aOObD pic.twitter.com/UPcaDSOUKq

Hopefully, this is something worth waiting for.

After the first two films, “Terminator” has struggled to find its footing. After endless failed reboots, however, there may be hope yet. Mattson Tomlin, who wrote “Project Power” for Netflix, and Production I.G. are developing an anime series based on James Cameron’s films. Hopefully, this time’s a charm!

Netflix has released the first trailer for its “Shadow and Bone” adaptation.

Additionally, we covered the following: