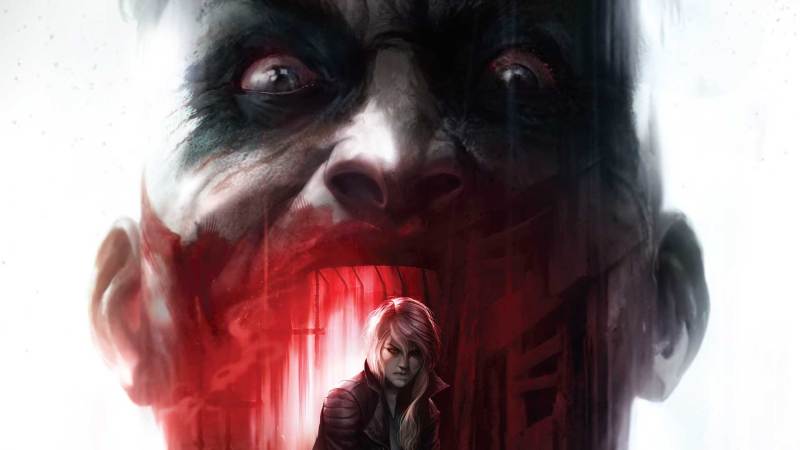 What I love most about comic book stories is how they get reimagined time and time again. That’s why I’m an avid reader of the titles published under DC’s Black Label. These books are not part of the DC Universe’s main continuity, so the authors are free to tell their stories as they see fit. Kami Garcia uses this opportunity in her miniseries Joker/Harley: Criminal Sanity, where she gets to reinterpret some really iconic characters: Joker and Harley Quinn. By doing so, she goes as far away as possible from their previously established images (while of course maintaining their core characteristics). They’re not these over-the-top clowns and their toxic relationship is not part of the story. Instead, the author writes a gritty, realistic tale, which makes the Batman world even more down-to-Earth than Nolan’s films once did. Is Garcia successful though?

DEEP INTO THE KILLER’S MIND

Joker/Harley sprouted from an idea of a story about a teenage Joker. Kami Garcia, who is known for her novels and comic books for young adults, was interested in the process of a young boy becoming a monster. She presented her idea to the editors of graphic novels for teens line at DC Comics. Although the idea turned out to be too dark for them, DC didn’t send Garcia away. They suggested she turn her teenager-oriented project into a project for adults. Garcia then added Harley Quinn to her original concept, who in this version is a profiler working for the Gotham City Police Department.

The starting point of the story is simple: there’s a new serial killer in Gotham and he’s becoming bolder and bolder with each committed homicide. Harley’s job is to assist the police in catching him. However, she quickly realizes that the murderer may have killed before. He may have killed her girlfriend.

Kami Garcia worked on the miniseries with dr. Edward Kurz, whose advice was to start with the antagonist’s psychological profile (which is included as a story bonus). Kurz consulted on the series and his main job was to make sure that Joker’s actions were in accordance with the said profile. As a result, Joker’s psychological portrait is satisfyingly credible. He is not an exaggerated lunatic nor a clown, but a cold and calculating serial killer; one who brings to mind the Zodiac Killer or Ted Bundy, rather than the over-the-top comic-book creation he usually is. Here, he’s an organised, intelligent and clear-headed psychopath, which makes him even more terrifying than ever.

Garcia seems to know a lot about the inner works of such criminals’ minds, and — what’s more important — she can tell the difference between those who are mentally ill and those who have mental disorders. She cleverly implements these differences into the story, even if sometimes she does so too directly. The Joker’s story itself is also very absorbing. It’s told mainly through pictures, and although at first, it seems to lapse into the cliché territory, ultimately it turns out to be very authentic and respectful to the mystery around the Joker character.

Juxtaposed with this terrifying murderer is Harley — a talented psychiatry graduate, who starts working for the GCPD. Garcia — luckily — doesn’t go for the “love story” between Joker and Harley. I say “luckily”, because as far as I’m concerned, Harley got to spread her wings as a character when she became independent. The author’s decision was partially dictated by her urge to write as realistic a story as possible and dr. Kurz didn’t know any cases of a psychiatrist of this level falling in love with a psychopath. Garcia still portrays Harley as a survivor of an abusive relationship, though of a different nature. This time Harley’s abuser is her mother. It immensely affects Harley’s psyche and her life choices, which Garcia makes clear in a gentle, never too literal way.

The lack of a love story doesn’t mean there is no relationship whatsoever between Harley and Joker. After all, the miniseries’ title suggests the story is all about it. And indeed, Garcia looks closer at the titular characters’ mutual impact. But it is rather of an archetypical nature: Garcia competently plays with the trope of the chased one and the chaser. The thing between Harley and Joker resembles Hannibal Lecter and Clarice Sterling’s relationship in The Silence of the Lambs (and Garcia did say she was inspired by Harris’ novel). There’s a mutual fascination, which at times crosses Harley’s professional boundaries, but there are no romantic intentions behind it. This is also due to the fact that Joker is connected to Harley’s painful past, so instead of having romantic feelings, Harley wants revenge. What’s really interesting is also the fact that the characters keep their pace with each other — they are intellectual equals and their battle is truly exciting to follow.

If I were to point to the script’s flaw, I’d probably say it’s the hasty finale. The pace on the last few pages unnecessarily picks up and you get the impression that Garcia had to stuff too much into her final issue. Besides that, however, I like the finale very much, because it serves as a closure to a certain stage in the main characters’ lives and highlights the changes they underwent.

Three artists worked on the visual side of the comic book: Mico Suayan, Mike Mayhew and Jason Badower. The first one drew the scenes taking place in the present, while the other two were responsible for the flashbacks. Their styles, though slightly different when it comes to expression and dynamism, have got one common denominator: photorealism. It suits the story well by underlining its grittiness and the authors’ willingness to leave the superhero exaggeration behind.

An interesting device was used when it comes to colouring. The events in the present are black and white, while these in the past are fully coloured. It’s a simple, yet effective solution that goes against the usual conventions — after all, you would rather colour these two timelines the other way round. But it is not only about subverting expectations and getting the reader out of their comfort zone. This colour reversal also highlights the sad reality of the story told — in the past, although it is not devoid of difficult and dramatic events, there is still some sort of hope. The present shatters this hope almost completely. 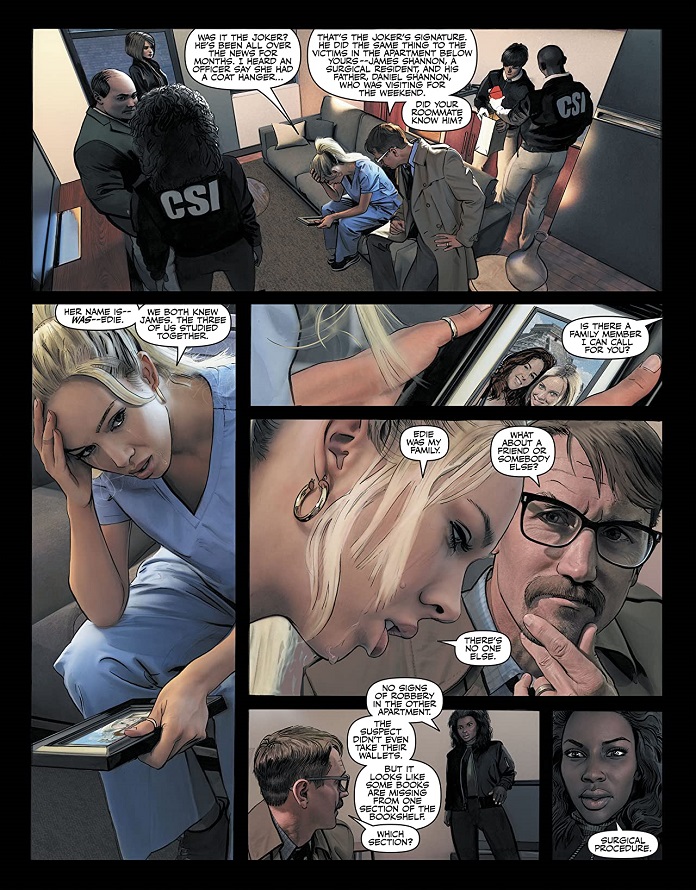 When it comes to craft, I was impressed the most by Mike Mayhew’s work. He balances realism and expression really well so that his drawings don’t lack dynamism. Badower and Suayan are not as good. Their work — despite a lot of details — sometimes seems too static and emotionless. This is by no means to say that it’s bad. But it is imperfect.

It’s also worth looking at the compositional side of the comic book. Apart from the classically placed panels of different sizes, there are also these unique, big splash pages. They’re a departure from the traditional, sequential comic book narration and instead go into the less literal realms, where the inner feelings of the characters or parallels between them are more important. These are not particularly innovative solutions in today’s comic books, but they definitely enrich this title.

Joker/Harley: Criminal Sanity is an excellent comic book and I probably won’t stop thinking about it for a long time. I hope Kami Garcia comes back to Gotham City she created here. In the meantime, I can not recommend reading this title enough! 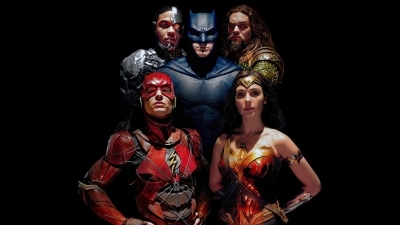