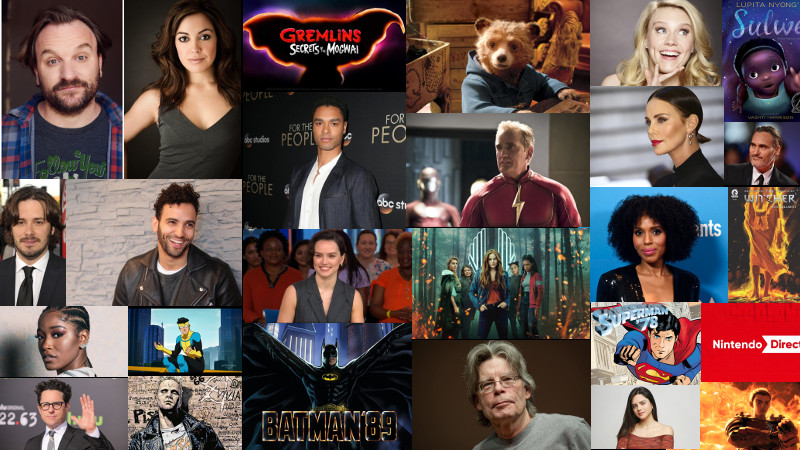 There’s a new Supergirl in town. Warner Bros. and DC’s “The Flash” will feature the new iteration of the character. She will be played by Sasha Calle, a Colombian Daytime Emmy-nominated actress known for her role on “The Young and the Restless”. This will be her big-screen debut. Watch her react to the news of her casting when it was shared to her by the film’s director, Andy Muschietti.

Although there are some issues with “The Flash” — mainly the firing of Ray Fisher after he went public with the information about his mistreatment during the reshoots for “Justice League” — it’s hard not to be excited for Calle. I hope “The Flash” won’t be her only appearance in DC films and that she will get her own standalone movie.

According to Deadline, Keke Palmer will star in a new project from Jordan Peele, the author of “Get Out” and “Us”. Additionally, the star of “Get Out”, Daniel Kaluuya, is in talks to take part in the movie. The details of the project are still under wraps but, from a director like Peele, one can only expect a thought-provoking and entertaining film. Can’t wait for more details!

DC comics will milk your nostalgia dry. The company announced two comic books set in the movie worlds of 1978 and 1989. These will be “Superman ’78” and “Batman ’89”. Here are the official synopses of the two:

Superman ’78: Rob Venditti (Hawkman) and Wilfredo Torres (Batman ’66) will collaborate on Superman ’78 to tell stories set within the world Richard Donner and Christopher Reeve created in Superman: The Movie. In Superman ’78, bystanders are surprised and delighted by Superman’s abilities, and Lois Lane doesn’t (yet!) know that Clark Kent is secretly Superman. The sheer thrill of seeing a man fly, leap, or stop a bullet will be reflected in this environment where Superman has just been introduced! Inspired by Donner’s classic, timeless style of superhero storytelling, in Superman ’78 Venditti and Torres will show fans that a man can truly fly.

Batman ’89: Continuing the twisted adventures of DC’s Dark Knight from Tim Burton’s seminal classic Batman movies, Batman ’89 brings in screenwriter Sam Hamm (Batman, Batman Returns) and artist Joe Quinones (Dial H for Hero) to pull on a number of threads left dangling by the prolific director. The gothic mentality behind the world, while still rooted in a sense of realism, helped inform many of DC’s global fans’ first impressions on the Dark Knight’s Gotham. In the new Batman ’89 comic, Hamm and Quinones will help usher in the return of Selina Kyle/Catwoman and will debut a new Robin! Plus, Quinones has a vision for Harvey Dent/Two-Face that is as close to movie magic as a comic can get!

OK, DC, you got me here. Take my money and don’t tell anybody I fell for your tricks.

New actors have joined the “Peacemaker” series — a spin-off to the upcoming “The Suicide Squad” by James Gunn. Alison Araya and Lenny Jacobson have been cast in recurring roles. They will join previously announced John Cena, Danielle Brooks, Chris Conrad, Jennifer Holland, Steve Agee, Robert Patrick, and Chukwudi Iwuji, and play a married couple Amber and Evan. The series will delve into the origins of the title character (played by Cena) and is set to be released at the beginning of the next year on HBO Max.

The cast of “Dungeons & Dragons” is growing and growing. Regé-Jean Page will join the previously announced actors Chris Pine, Michelle Rodriguez and Justice Smith, Deadline reports. The “Bridgerton” star will have a leading role in the project, which — casting-wise — looks more and more promising.

Netflix picks up Chinese animated fantasy film, “New Gods: Nezha Reborn”. According to Variety, this is yet another retelling of the classic mythological text “The Investiture of the Gods”. This time, however, it will be updated “to give the setting Donghai City, a melting pot where gods and people from different cultures co-exist, look cool, contemporary and futuristic”. Here’s the official synopsis:

The revised story tells the tale of young god Nezha who is reborn as Li Yunxiang, a young daredevil delivery courier, some 3,000 years after the story’s original setting and the Battle of the Gods. Li discovers his true identity and valiantly battles the Dragon Clan, their masked assassin, and other enemies, to protect his friends and family in a tale of life and death.

Sounds interesting enough, at least if you’re into mythologies.

Tim Burton will make a TV directorial debut in a spin-off to the “Addams Family” centred around Wednesday. The live-action series, which is being developed for Netflix, will follow Wednesday as a student at Nevermore Academy and Netflix promises a “sleuthing, supernaturally infused mystery”. I hope Burton will be able to bring his unique sensitivities to the project and cook up something visually and narratively special. Fingers crossed!

Paddington is coming back. Variety reports that the British bear will appear in a third live-action film based on Michael Bond’s books. The previous entries in the series were met with huge critical acclaim, so let’s hope this one won’t be a let-down.

Marwan Kenzari (“Aladdin”, “The Old Guard”) is in talks to join the cast of „Black Adam”. The Wrap reports he would play a villain role in the films, which revolves around DC’s antihero played by Dwayne “The Rock” Johnson. With Aldis Hodge, Noah Centineo, Quintessa Swindell and Sarah Shahi already cast in the film, it looks like it is going to have an interesting, diverse cast.

Nintendo held its Nintendo Direct presentation. You can watch it below, but since it’s 50-minutes long, here are all the projects announced:

A new “Constantine” series is in the works for HBO Max. J.J. Abrams will produce via his Bad Robot and the British novelist Guy Bolton is set to write the pilot. According to Deadline, this new iteration of the famous character will be a younger one and the producers are looking for a diverse actor for the lead role. Hopefully, the series will do justice to Constantine although it’s a pity Matt Ryan — a perfect match for the character — won’t take on the role again. Fingers crossed for the new actor though!

Gremlins: Secrets of Mogwai, the animated prequel to the Gremlins franchise got an early season 2 renewal. The series, which is still yet to be released, is produced by Amblin Television in association with Warner Bros Animation. It will include the voices of such actors as Izaac Wang, Ming-Na Wen, BD Wong, James Hong, A.J. LoCascio, Gabrielle Green, and Matthew Rhys. With so many stars attached and the fact that nostalgia still sells like hot cakes, I’m not surprised Warner wants more before it even got more.

John Wesley Shipp, the Flash from the 90s, will be appearing in the second season of “Stargirl” as Jay Garrick. This will be a role he reprises from the CW’s “The Flash”. According to the EW, it will help establish the series as a part of the post-crisis DC CWverse, alongside “The Flash”, “Superman & Lois”, “Batwoman”, “Black Lightning”, “Supergirl”, and “DC’s Legends of Tomorrow”. Sure, why not?

Dark Horse will release another comic book mini-series based on “The Witcher” by Andrzej Sapkowski (and the games by Crunchy Projekt CD Projekt RED). Written by Bartosz Szybor, drawn by Vanessa R. del Rey, coloured by Jordie Bellaire and lettered by Aditya Bidika, “The Witcher: Witch’s Lament” will tell follow Geralt on yet another adventure:

The Witcher: Witch’s Lament follows famed witcher Geralt after a routine hunt. But when the captured witch is burned at the stake, Geralt is haunted by images of her death, and a harrowing warning begins to take shape. Soon, Geralt finds himself drawn into the mystery surrounding this heinous persecution.

Although “The Witcher” comics are by no means masterpieces, they are a nice addition to the Witcher lore and quite an entertaining read. Looking forward to this one. Issue one comes out on May 26th.

Lupita Nyong’o’s “Sulwe” will be adapted into an animated musical by Netflix. It won’t be the first time Netflix tackles the material, as it was featured in a series called “Bookmarks” earlier this year, where Black celebrities read children’s stories by Black authors. There are no more details available right now but, since the project has just been announced, the release date is probably rather further than nearer. That being said, “Sulwe” is a charming story and I can’t wait for its feature film adaptation.

Ari Aster, the director behind some of the most unsettling horrors from the last decade, has found the star for his next project. And the star is: Joaquin Phoenix, Deadline reports. Titled “Disappointment Blvd”, the project is said to be “an intimate, decades-spanning portrait of one of the most successful entrepreneurs of all time”. As a fan of both Aster and Phoenix’s, I can’t wait.

Daisy Ridley was cast in the film adaptation of “The Marsh King’s Daughter”, Deadline exclusively reports. “The Star Wars” actress will portray the title character, Helena, “a woman living a seemingly ordinary life, but hiding a dark secret: her father is the infamous “Marsh King,” the man who kept her and her mother captive in the wilderness for years. After a lifetime of trying to escape her past, Helena is forced to face her demons when her father unexpectedly escapes from prison”. Sounds really intriguing and I’m sure Ridley will add a lot of depth to the character.

“Fate: The Winx Saga”, an edgy reimagining of the “Winx Club” series, has been renewed for season 2. Watch the announcement below.

J.J. Abrams has set his new series, “Subject to Change”, at HBO Max, according to The Hollywood Reporter. It will follow “a desperate college student who signs up for a clinical trial that begins a wild, harrowing, mind- and reality-bending adventure”. Abrams will write the script and will be an executive producer on the series together with showrunner Jennifer Yale. Definitely something to look out for.

Edgar Wright will direct “The Running Man” for Paramount. This will be the second adaptation of Stephen King’s dystopian science-fiction horror novel written under the pseudonym Richard Bachman. The previous one featured Arnold Schwarzenegger and was directed by Paul Michael Glaser. This one, however, is said to be much more faithful to the source material. With Wright onboard, I’m sure it will be a stylish one too.

Speaking of both J.J. Abrams and Stephen King, The Wrap reports that the two will cooperate on an anthology horror series.

Kate McKinnon dropped out of umm… “The Dropout” — a Hulu series about the Silicon Valley scammer Elizabeth Holmes. It’s a pity that they lost such a great actress and I hope they find a good replacement.

Charlize Theron and Kerry Washington have joined Netflix’s “The School for Good and Evil”. Directed by Paul Feig, the film is based on a young-adult novel by Soman Chainani. Here’s the official synopsis of the book, taken from the series official webpage:

Washington will portray Professor Dovey and Theron — Lady Lesso, both of whom are connected to the title school. Netflix probably eyes a franchise here, so: fingers crossed.

We also shared two trailers: for “Cruella” and “Mortal Kombat”.